“This Bødy Hacking performance was developed in collaboration with Theoriz Studio to create a visual and audible manifestation of Lukas’ vital physiological processes as his body responds to his actual performance in real-time.  By controlling his heart rate, breathing and alpha-wave brain patterns he is able to trigger and modify fractal algorithms which produce a complete audio-visual output. Lukas’ involuntary autonomous body responses to stress provide the basic material for the experience which you see projected, but the transformation of these images and sounds into something “other” is a result of his consciously influencing those vital responses through focusing in a meditative state and willfully changing them.  The images and sounds produce a singular art-piece which is a metaphor for the physical and psychic experience of the performer”    DAVID NELSON, Mad Max Fury Road visual effects supervisor 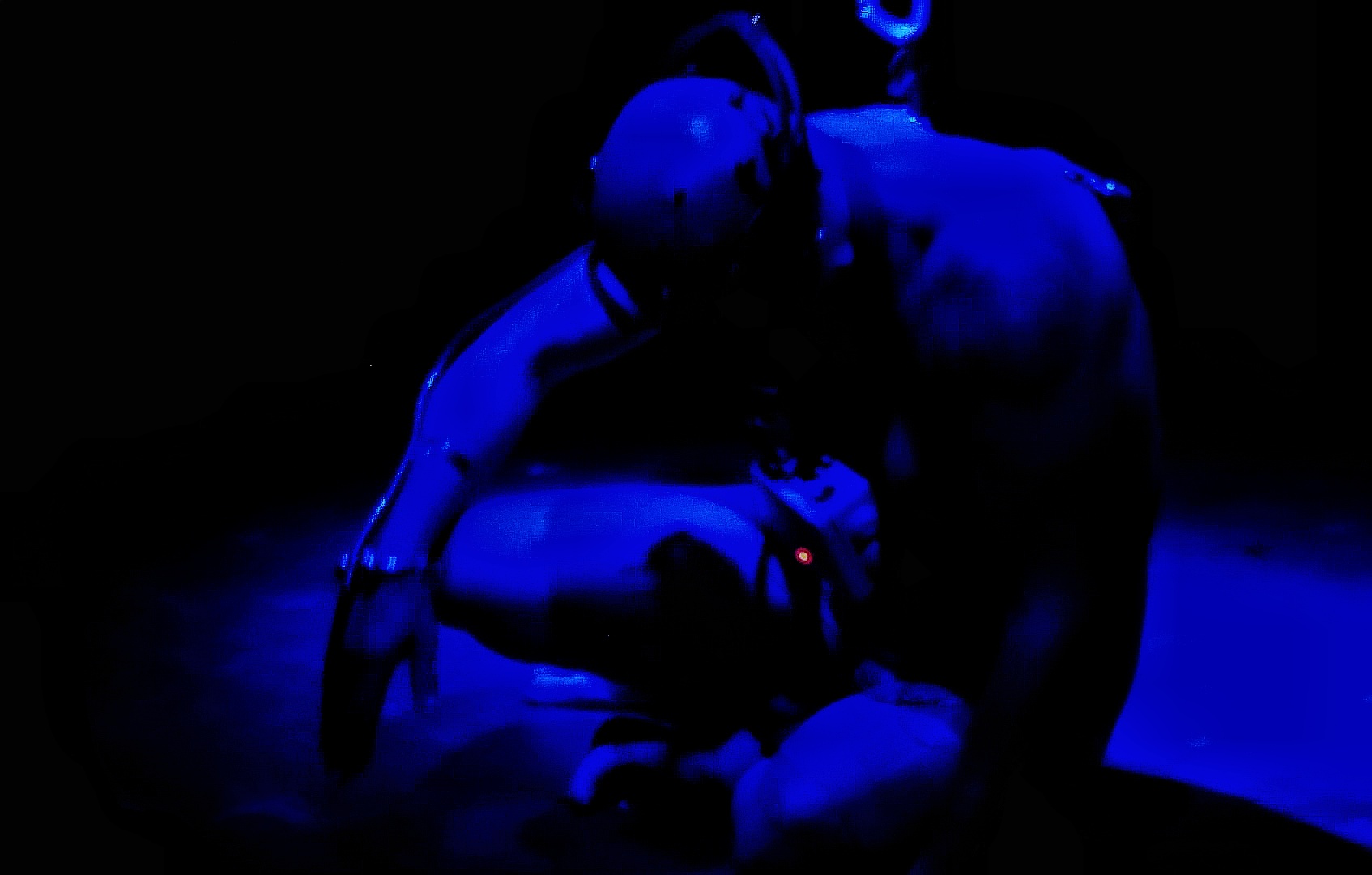 Some unusual practices can take us to an altered state of consciousness giving us access to an imperceptible world. Bound to a set of high tech elements of captation, Lukas Zpira invites us to share his experience during a singular and immersive biofeedback performance. With Danse NeurAle, flesh and machine are becoming a single organism engaging in an unspoken dialogue with the public. The whole environnement becomes a perceptible extension of his inner journey. .  Each technological element has been hacked or crafted in order to record a specific set of biological or neurological responses to the experience. Each signal recorded triggers a specific action making those responses perceptible to the public. Lights, sounds and visuals are a direct translation of Lukas’ biological and neurological evolution during the performance. The artist's heartbeat sets Danse NeurAle’s tempo while his breath organically connects us with him.  At the cross between Art and Science, Danse NeurAle is a sensorial experience questioning our perception and the reality of the human body’s limits.

Lukas appears on stage naked in the middle of a symbolic circle, the public around him. We can hear his deep breath and heart beat. The light is natural. A projection shows the long preparation required before the performance condensed into a few minutes.  The audience becomes fully aware of the significance and depth of the act. The performer is equipped with a series of wireless sensors.  The generated signals are analyzed and collected in real time to be processed through an algorithm which produces the visual and audio effects. By controlling some of those data inputs, Lukas Zpira controls his ascension during the suspension.  By controlling his heart rate, his breathing and his brain waves, Lukas can trigger changes in the algorithm in order to modify the environment. The involuntary and autonomous responses to the artist’s experience supplies the base material to which the audience is confronted.  The whole room becomes an extension of the self, producing a unique work of art, a metaphysical experience through which the public can wander as it pleases and engage in an intimate relationship with the performer. 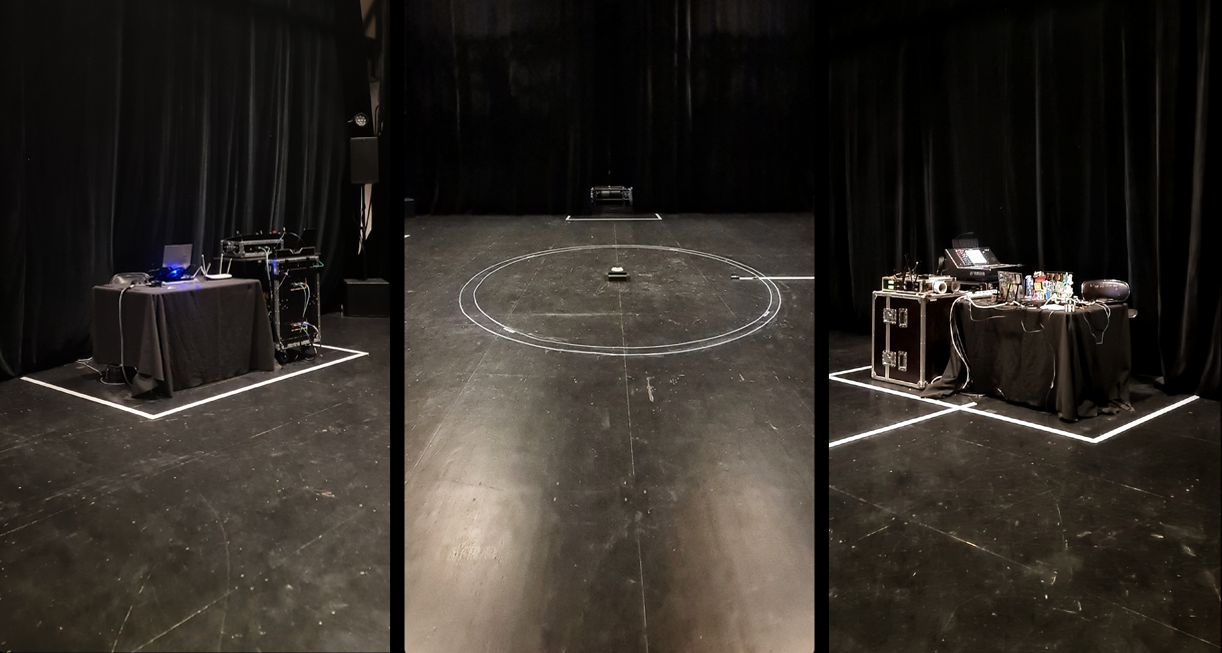 In this project, different technologies will be used in order to capture Lukas biological informations.  EEG / Electronic stethoscope / Heartbeat, Body temperature, Kinetic or motion sensors / Robotic motion system / Microphones are among the constantly evolving technologies hacked or created from scratch by our team to serve Danse NeurAle’s advanced needs. Bound to the machine, the artist’s body becomes data flesh, creating a bridge between the metaphysic and the physical world.  Danse NeurAle 4.0 will mark a new step, with the team developing new software and building from scratch new hardware specifically designed for this singular performance, opening to endless possibilities. The data will be collected in Open BCI in order to be used for scientific research. A robotic platform currently in development will serve to transcribe the collected data into a unique art piece while some other data will be minted into NFT pieces.

Danse NeurAle was created in 2011 by Lukas Zpira with the collaboration of Italian hacker team Spectre A.K.A Enrico Viola & Stefano Moscardini and first presented during the Borderline Biennale 3rd edition in Lyon (France) the same year.  Though this first version brought most of the elements that still compose the performance, it was staged with Lukas being separated from the public and set as a visual show.  “For technical reasons I had to be already on stage before the public entered the room. I could hear the public coming, people speaking together. As they approached, they could hear my breath as I was already wired to a microphone. They started to just whisper, then doing so, could hear my heartbeat. It was the first time I could feel this kind of organic connection with the public.  We presented this version a few times, and, though it was really well received, I always had the feeling I was losing this organic connection as soon as the performance really started. In the meantime I had pushed my research further into different sorts of rituals. I wanted to go further in that direction, giving the audience the possibility to see the invisible, perceive the imperceptible and to feel the essence of the ritual I have to go through to make it happen and engage this invisible dialogue.  I had to rethink the performance.  In 2014 I took a new approach and conceptualized a complete new version, focusing on this organic connection that opened a new set of possibilities, in order to transform what was a performance into an immersive experience.  "It took me 4 years to find a new team who could help me create this piece.” (Lukas Zpira)  Danse NeurAle 2.0 was presented in two different staged versions at Ardenom in 2019 and at Le 11 theater in 2020, both in Avignon, with David Chanel from Theoriz as art director and different development team.  “From my standpoint, Lukas’ suspension performances are rituals, inner journeys with multiple phases. His work relates both to the Body and ancestral rites. With Lukas, we met under the seal of cognitive technology and post humanism, subjects that we have in common. Following came the collaboration and research on how to make tangible this invisible performance, this journey which only happens in Lukas’ head, this neural dance. My approach has been to burst Lukas’ body into space to immerse the spectator in the different states of his physical experience.  Hybridizing and hacking Lukas’s body into a connected body, I was able to explode the data flows emanating in space, in an immersive digital performance. A new version of neural dance followed, an audiovisual performance mixing organic matter and digital data to make the audience feel and experience the intensity of this dance of the brain and body states.” (David Alexendre Chanel)  Danse Neurale 3.0 was presented in 2021 during the International Festival of Geography, following a one week art residency organized by the Pôle Spectacle Vivant de la Communauté d'Agglomération de Saint Dié des Vosges. It was the first time the team used an advanced robotic elevation system provided by Skyron Motion, opening the possibilities for Lukas to control the motion using body movements or brainwaves.

“Heir of the body art movement and pioneer avant garde of the genre, Lukas Zpira, essayist, film director and photographer, began to include in his practice since the late nineties new technologies such as subcutaneous implants.Founder of bødy hacktivism, the French artist began to focus on the various problematics of the connected and the alienated body early on in his career. Remotely controlled body, modern flesh puppet dominated by the pressure of information and omnipresence of control technologies and contemporary communications.” Beatrice Sutter/ADN Magazine.  Lukas Zpira, Started his artistic experimentation early 90’s in the south of France. First doing mostly painting and going to more conceptual work, he quickly started to use his body as a medium. Arnaud Labelle Rojoux wrote early 2000 “Lukas Zpira bring art into the social context”.  In 95, Lukas opened the first body piercing studio in France and pioneer body modification practices. He travels in the US and Canada to connect with the early scene, working on its own transformation.  Lukas begins performing In 2000 during ART-KØR.00, a 6 month event he organized in Avignon, featuring artists such as Stelarc or Yann Minh, and speaker, anthropologist, sociologist among those Philippe Liotard and David Lebreton, to question the place of self transformation and its implication in our modern society.  Soon after the event, Lukas started a nomad life travelling the world intensively to present his body of work. He founded the Body Hacktivism movement and wrote its manifesto while in Japan in 2002 to explain his philosophy and artistic guerrilla. Human hybridization, self transformation, rituals, are at the center of the artist’s work.  Successor of the Body Art movement & Viennese Actionism and pioneer of a new genre, Lukas Zpira, has incorporated new technologies into his practice since the nineties. He is involved in the post-human psychoanalytic research by Frederic Tordo in France, that led to the publication of “Le Moi Cyborg” (the Self Cyborg) and the creation of a new psychoanalysis branch, the “Cyberpsychology”. Lukas Zpira is among the Cyberpsychology university degree lecturers since its creation in 2019.